Elegy for a PC

I want to write about something before it is gone. Something that affected me powerfully, is largely responsible for who I am as a person, and which, in the grand scheme of things, very few people will have had the chance to experience.  I want to talk about the early home computer, and the brief, incredible time when it was at its rawest, and to me, its most potent. The C64, the Apple II, those machine-gun disk drives, hole punches, and boxes of magnetic media shedding their bits. The hum of those monitors, the whirring hot engine sound as they warmed up. Computers WARMED UP. PEEK and POKE. Hastily scrawled labels on floppies. LOAD"*",8,1

Have you seen the AMC television series, Halt and Catch Fire? I almost cried watching the first episode because of how powerfully it conjured up an era. How often are you there, elbow deep, in something truly new and uncharted? Something you can shape? In a time and place where others are looking up from what they're doing, and realizing what it really is with dawning wonder?  You share that time with them, pushing outward, feeling for the edges of this new thing and my god the edges are FAR AWAY, there is so much space to be claimed and none but us to claim it.

That time? It was fucking singular. It won't come again, not that way. It was sharpened and made more incredible by the era it took place in - the era of Star Wars, Conan, Indiana Jones. Lucas and Spielberg. There was a raw joy to that time that infused the computer industry. Christ, it was amazing.

Even more thrilling, it belonged to the young more than to the old. We were growing up with it, ravenous for it, and, let's face it, we had the disposable time to be consumed by it. Those MACHINES, barely held together, the smell of warm plastic and electricity, the sure knowledge that this was fucking MAGIC that you could learn and understand and your elders would never know it like you did, would never wield it the way you could. They'd made it, but you knew what to DO with it. How can I relate this to you? It was like being goddamn Harry Potter and getting the fucking letter, for real.

And everywhere was joy and optimism. Go back and read some of those enthusiast magazines from the era - Compute!, RUN, Byte. Jesus, the joy of it, and along with that joy a realization that there were others like you who recognized this for what it was, who needed to be IN it like you did. A club, fully formed, emerging from the mist. Yeah, we know each other. Yeah, we know what this means. It hurts my heart just to think back on that feeling, my throat seizes, that's how much it affected me, decades on. You might find yourself smiling with a sort of self-conscious embarrassment reading those early magazines, their breathlessness, and to a modern user of a PC, their naivete. But they had a hell of a lot more fun with their computers than you do with yours now, I goddamn guarantee it.

At the root of it, here was a box that you could make do things.  It booted, and then it waited for you to put it to work. You could flip open the book that came with it, and within seconds you could bend it to your will. You started right off with code. There was barely any tissue between you and the heart of the creature.

That doesn't seem amazing now. That sounds cumbersome. But it WAS amazing. And what could you do? Why, we didn't even fucking know yet. How about this? Yes, by god we can do that. By god, we can make that work. In terms of pure resources, it was laughably limited compared to what we work with now, but you were so CLOSE to it, right up against the roar of the engine, you could feel it under your hands - this living thing that you could forge into something new.

How many unspoiled frontiers are there? Do you expect to see one in your lifetime? A vast real estate, unmarked. As far as you can see, the space to claim for whatever you might dream of. More than that though, a frontier that others were eager to explore with you, not to subvert it, not for money, not for gain, not for themselves, but for the giddy pleasure of making something and watching someone else's eyes grow wide and hearing them say 'how the fuck did you do THAT', and understanding that every one of those moments lit a fire in someone else, sparked another idea, begat another crazy impulse - the desire to sit at that mean little beige (or brown, or cream ) box and hammer something else into existence.

We've passed that time. We don't know how these things work anymore. The engine is rooms and rooms away, and we touch it through a few delicate levers. Our hands aren't on the hot metal now. That once unspoiled frontier is sectioned off, charted out. These are computers for everyone, and they have lost almost all of their personality, like a modern car. All aerodynamic styling and optimization for function, no character or shape to them. You need a specialist to change your oil.

The machines of that lost time had presence, and texture. Just by seeing a screen, you could tell if it was an Apple or a Commodore or a Spectrum. Hear just a few notes and you knew it was a SID tune. They couldn't replicate anything perfectly yet, so they gave you interpretation, and as a result, a specific character. Every computer had a fingerprint. Most of them are gone.

You can't go back of course. You shouldn't. But that time, it was special. It's something I can't pass on to my kids, can't relate to anyone who wasn't there. When our era, the era that experienced it, has vanished, that time will also vanish, and it will be a shame that no-one else will ever experience it that way again.

We live in an age of group work, of concepts so complex that they demand teams to contain the knowledge required to wrestle them into something real. The lands have been colonized. The borders have been set, the laws drafted. It's hard to imagine a future where a frontier arrives that is so accessible and so vast at the same time, ever again.

Finished up that song.
Here it is!

https://soundcloud.com/travis-baldree/chainsaw
Posted by Travis at 4:08 PM No comments:

Been learning guitar for the past two months, and discovered that you can use the Realtone cable from Rocksmith as a (really cheap) digital interface.
Combine with my Macbook and GarageBand, a Shure SM57 and a 1/4in coupler, and voila, home recording studio.
Amazing what you can do with computers these days.

Anyway, the whole point of learning to play guitar is so that you can make music.
So today I wrote a (crappy) song, plugged in my guitar and mike, recorded the thing, and mixed it down (also crappily).
My home amp is a modeling amp anyway, so switching to the software modeled amps of GarageBand isn't really much of a step down. I probably could have miced my own amp, but that seems pointless unless I have something good.

Anyhow, it's not a long song, and it is a long, long way from a GOOD song, but by god, it is a song.
You can only go upward, right?

Here it is. Watch out, it has a dirty word in it.
http://www.buildingworlds.com/DOWNLOADS/Chainsaw.mp3

So, I kept on doing that comic...
It's over here. I've got a few weeks under my belt now, things are changing a lot as I go.
Check it out.

www.flapcomic.com
Posted by Travis at 7:52 PM No comments:

OK, it's really interesting doing this rapidly in sequence and developing characters and style very quickly.

This one is all digital, and thankfully has nothing to do with Sim City. Trying for a little more dynamic style, more interesting framing, and some updated character designs.

Also really going for a retro sunday-paper color scheme with shades of Calvin and Hobbes. (poorly)

What do you think?

Oh hey, another comic. These are sort of fun.

No crayons this time. 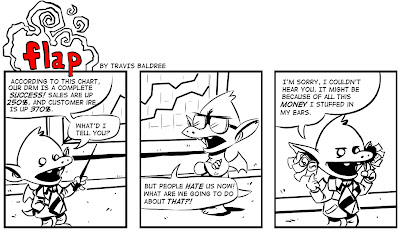 Posted by Travis at 2:30 PM No comments:

Since SimCity refuses to load right now, I relieved my frustration by making a comic about always-online DRM and the often flimsy excuses for it.

For whatever reason, I decided to draw it in crayons on brown paper.

In retrospect, this was a terrible idea.